D-STAR (Digital Smart Technologies for Amateur Radio) is a digital voice and data protocol specification developed as the result of research in 2001 by the Japan Amateur Radio Leagueto investigate digital technologies for amateur radio. It is an open standard for transmit digital information (data and voice) via narrowband radio communications. While there are other digital on-air technologies being used by amateurs that have come from other services, D-Star is one of the first on-air and packet-based standards to be widely deployed and sold by a major radio manufacturer that is designed specifically for amateur service use.Voice Information is send with the AMBE voice codec with a speed of 3600 bps. This codec is not “free” but patented. Usually the following amateur bands used D-STAR: 144 MHz (2 m VHF), 433 MHz (70 cm UHF) and 1.2 GHz (23 cm UHF). Sending of data is also possible. On 2 meters and 70 cm, this is done at speeds up to 4800 bps, but speeds on 23 cm are possible to 128 kbps.This high speed data transfer is via an Ethernet connection (128 kbps). It is also possible to send simultaneously voice and data. 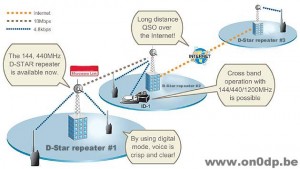